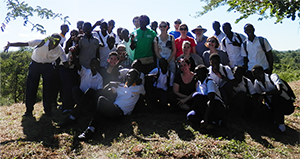 Mikumi Solar Water Project in Tanzania – At the start of this year I never would have seen myself taking part in a trip like this but now I can’t imagine doing anything else. The opportunity and experience was truly once in a life time.

The purpose of the project this year from an electronic stand point was to design and install a new weather station to improve on last year’s project by recording, logging, and sending weather data back to NSCC. Another focus was to design a control system for the water treatment system which itself had to go through a number of design changes because of the condition of VETA’s water supply.

Going into this trip I wasn’t really sure what to expect in terms of the living and working conditions. When we arrived at Dar es Salaam I was greeted by a blast of warm humid air which took a day or so to adjust to. The tour around the city the next day was very interesting as I’ve never seen such a lively city before. The next day we were on our way to Mikumi. After we were settled in I found that the students were very kind and eager to help. They would always have questions about what we were doing or asking about the tools we brought with us.

The living accommodations we stayed at were at the top of the hill over the campus so every morning as we walked down to breakfast we could see most of the campus. The food was prepared fresh every day and it was a nice time to take a break. At the end of the first week we all went on a two day safari and took two trips to the Mikumi National Park with some of VETA’s tourism students. During the tours we saw a wide variety of wildlife in their natural habitat.

Work continued during the second week until Saturday when it was time to return to Dar es Salaam but before we left many of the students and faculty came to thank us for all the work we did and to show their appreciation for the project and NSCC International. After this experience if I had the opportunity to travel back to Tanzania I would go for it.