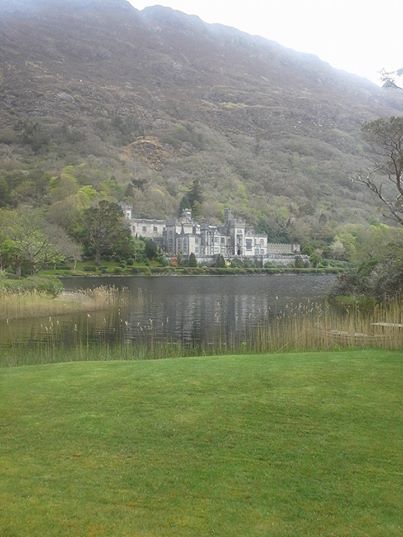 International Tourism in Ireland –  “Cead míle fáilte!”  That is an Irish Gaelic phrase which means “hundred thousand welcomes”.  Today was my first full day here in the “emerald isle” and what a day it has been!  Our group had Kylemore Abbey on our agenda, a beautiful castle located about an hour from Galway City.

When I first learned that we would be visiting an abbey, I thought we would be visiting a church or cathedral and did not bother to do any further research on this place.  This, I feel, was almost an blessing, as we pulled up to the stunning castle surrounded by a picturesque landscape.  The beautiful grey building gracefully overlooks Pollacappul Lake and is surrounded by lush greenery.  The most distinctive visual feature, in my opinion, was the steep rocky mountains that seemed to cradle the entire estate.

Our guide gave us a brief history on the castle before we arrived.  It was built in 1867 by Mitchell Henry, a wealthy man with many passions including medicine and politics, for his wife Margaret who adored rugged beauty of the area.  They enjoyed many happy years with their nine children on this 1,000 acre estate on which they also built a beautiful garden and a gothic church.  Tragically, Margaret died suddenly while on vacation in Cairo, Egypt when she was only 45 years old. Mitchell was absolutely heart broken and never remarried. Talk about a great story! It has since been owned by several families but was bought by the Benedictine community in 1920.

If there is one thing I have noticed so far, it is that the Irish people are warm and welcoming. There have been several times when I am on the elevator and have not said a word to the other person in it but when either one of us exits they always say a quick but friendly goodbye.  It really took me by surprise the first time it happened! As they were leaving they looked me in the eye and practically shouted “alright, then!” (which was said in a way that was a lot friendlier than it appears in writing). I thought that maybe that was just that one person, but the more I am out and about here, it seems that having kind parting words are customary.  I am actually quite fond of these exchanges now but it still strikes me as funny that the only words I say to someone are “have a good one!”

For anyone who plans on visiting Ireland, make sure to visit Galway city. The bustling, young atmosphere is definitely worth the two and a half hour drive from Dublin, especially if you would like to avoid a large center. It is surrounded by beautiful scenery and has every comfort of a large city, but with half the crowd!  So far, my journey with NSCC has been wonderful, but visiting the emerald isle has truly been the crown jewel of my experience.