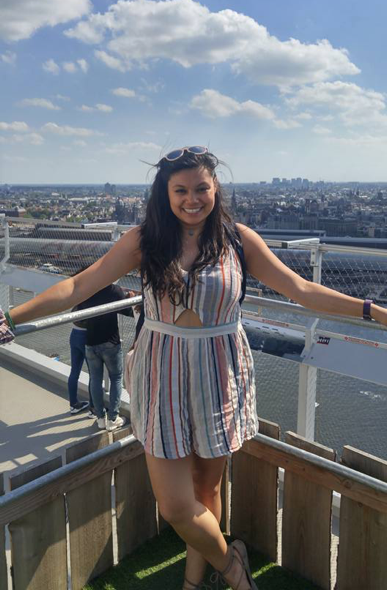 Doing Business in Europe in the Netherlands – It’s crazy to think that it is coming to the end of the trip. It went by fast but when I reflect on all the activities, sightseeing and friendships made I can say these last 3 weeks have been jammed packed. The first week was all about exploring the city and getting use to the boat accommodation. I luckily clicked instantly with another student and we became roommates which was ideal for out living situation due to the lack of privacy. On the boat, we received platters of different meats, cheeses, veggies and eggs with bacon every morning for breakfast.

Throughout the rest of the trip we had to eat out and discover new foods. Luckily throughout the weeks I managed to understand some common food items on the menu so it wasn’t as difficult to differentiate what was what. Kip nuggets and kaas tostis (chicken nuggets and grilled cheese) were usual options. Looking for different spots to eat allowed me to see the city and discover different stores among the city. The second week involved a lot more school work but we also got to do some excursions. During the trip, we visited the Island of Schiermonnikoog, saw a cute village named Marken and went to Amsterdam. It was nice to visit the beach and bike around the island of Schiermonnikoog. It was great to dip my toes in the ocean and sit on the sand, it gave me a similar feeling to home. While in Marken I also experienced a similar feeling. Marken was quite the little touristy village. It had restaurants on the docks and boats all nearby. The same day we visited Marken we also had the chance to see some windmills from the 18th century. It was interesting to learn about the Netherlands and the culture. We learned about different customs and norms in the Netherlands and got to learn about more European countries in school. I wished I had more time to spend around the school campus. It seemed like it had a lot to offer and it would have been nice to make friends with the local student. I found my culture shock didn’t come from school, or the city, but on the boat. There are people from Mauritius, Uganda, Tanzania, United States and other parts of the world. It was interesting to see and listen to their past lives and school ideas. Coming up to the third week we had the chance to go to the Philips headquarters in Amsterdam and met the CEO of the company. It was a wonderful experience where we learned about how a major company like that stays current. Afterwards we stayed at a beautiful hostel castle where we dreamt the night away until we rushed to explore Amsterdam in the morning. I enjoyed everyday of this trip. There were some days that were harder then others but overall, I enjoyed all the excursions, social events and free days we had. Groningen is a great city for students and I would love to come back one day. It’s sad to say that today is our last full day with all the students but I hope to keep in contact with a few people and see them in the future.