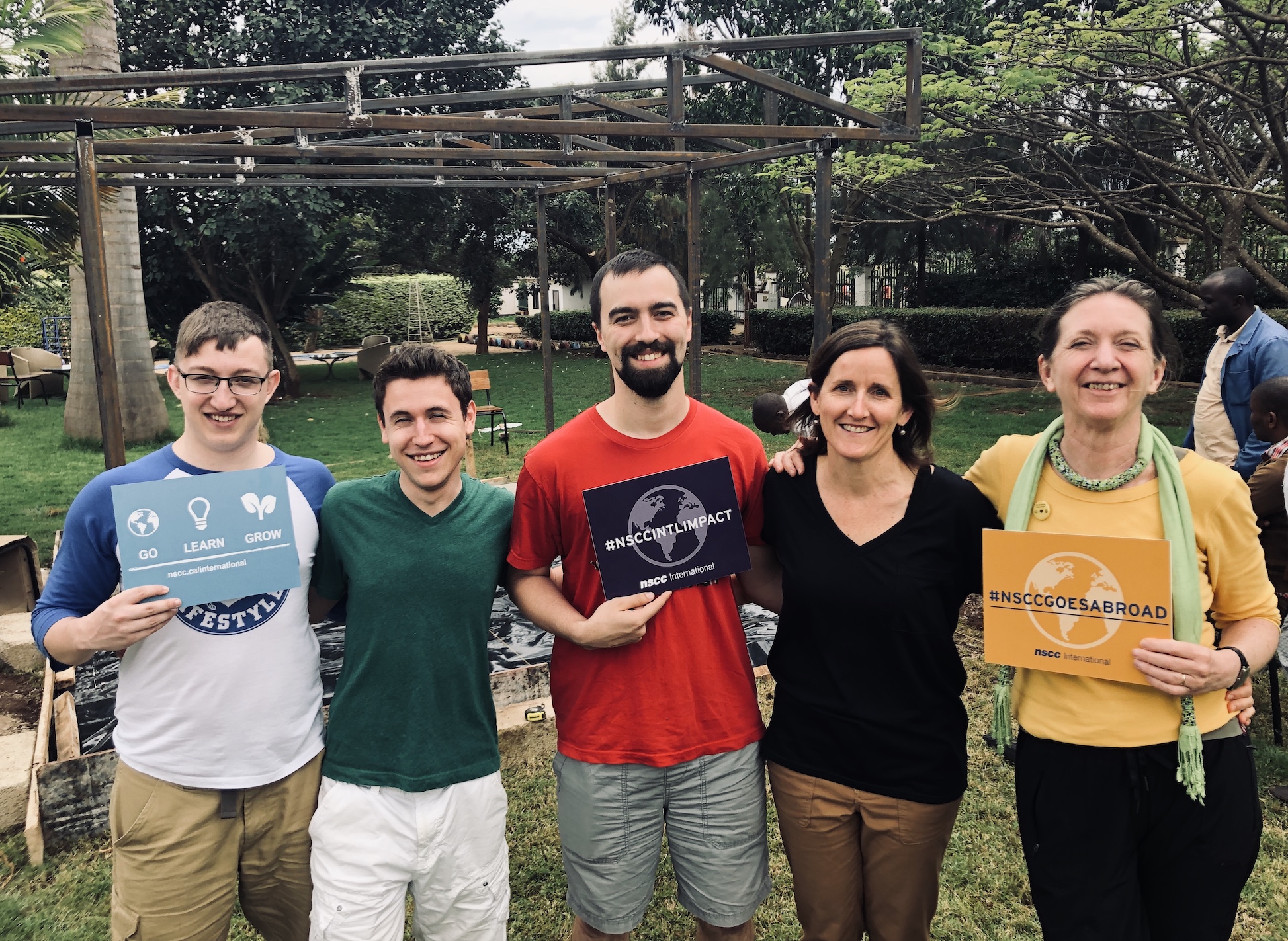 Solar Innovations Project in Tanzania – As we began our descent into Tanzania our captain informed us that we were passing Kilimanjaro on our left. I managed to catch a glimpse of the massive snowcapped peak swelling out of a sea of clouds, my white whale. We were greeted on the ground by our drivers from VETA (Vocational education and training authority) who swept up our luggage and sped down a black highway that cut through fields of maize, beans, and the occasional banana grove.  I found it difficult not to smile as I saw children herding livestock along the highway, the playfulness they had in performing their duties was heartwarming.

We arrived at the VETA Hotel and Training institute and were greeted warmly by Stan, our logistics and hospitality man, who had organized a tour of the surrounding Njiro village.  Our guides were one faculty at VETA and two students who were respectively introduced as J.J., Loshar, and Hantz. They were incredibly knowledgeable of all the local flora and fauna as well as the customs and language of the local people. Halfway through the tour we stopped at J.J.’s home where we met his wife and son who gifted a batch of eggs to Susan, one of the faculty joining us on the trip.  These eggs were later boiled for breakfast and had delicious almost white yolks! Hantz was very protective of my cavalier attitude toward all the stinging nettles and various other sharp and pointy plants. During the remainder of our stay all the students would call me “Mr. Ben”.  This would spread like wildfire, eventually even some of the staff would call me by this title.  Cynthia though it was a riot.

Once the working week started the team hit the ground running with the project. Ending each working day with a game of apples and onions, a suggestion by both NSCC leaders Cynthia and Susan, it became an end of day ritual that let us mentally leave the work for another day and enjoy our evenings.  The two men working for VETA who were pivotal to the project were Isaac and Dayo, who were responsible for helping with all our needs.  Isaac is not only a year younger than me, but also a mechanical technologist and fantastic mentor and friend.  They decided to hire a local contractor named Festo who owned a welding shop and was a former driver at VETA.  The man was so skilled and fast he was aptly and respectfully given the nickname Fasto. With Festo playing as our MVP I think we may just pull this off.

On the second weekend we lost a team member as they had to head back to Canada. Kellie provided an important role not only in organizing the whole trip, but in keeping us engineering types from being “lost in the sauce”. I’ll miss her glazed look every time Jean-Marc and Loic talk about wattage.  We said our goodbyes and then headed out for safari at Ngorongoro Crater, while Kellie stayed behind to catch a flight later that day.

Our safari guide was named Emanuel, a kind and professional man with twenty years of experience doing safari and tours. When we reached Ngorongoro Gate it looked like something out of “Jurassic Park”. We were warned about the mob of baboons who bummed around the gate and would steal from you given any chance. Once we saw them strolling around like gangsters on their home turf, we knew they had no fear of us whatsoever. Our experienced man Emanuel intelligently made us get out one by one closing the door each time. With the papers in order we promptly entered the conservation area.  Words cannot describe the view from the lip of the crater’s edge nor could any picture capture the majesty of the untamed landscape.  It was six hundred meters down to the crater floor, once there we spent all day awestruck and pinching ourselves. We saw many animals but the highlight for me was an unassuming cat that if you weren’t really paying attention would just assume its an overgrown housecat called a serval. We ended the safari with a family of about twelve elephants eating fifteen feet away from us.

The next week we successfully completed the project. WOOHOO!  Since Jean-Marc and I missed convocation to come on this trip Susan and Cynthia, as well as the staff and students at VETA, decided to hold a graduation ceremony for us.  I was very moved by the kind words of my mentors.  The next day we had an opportunity to teach 20 kids from local middle schools about engineering.  They caught on faster than I ever did and came up with some pretty innovative designs. We said our goodbyes with a few too many bottles of Kilimanjaro beer (because if you can’t climb it, drink it) and took a flight home the next day.

For those of you who’ve kept reading this far, thank you for your patience.  I know Kellie said no one reads the long blogs, but I’ve already left so much out that it almost doesn’t seem fair to this beautiful country that has given me so much.  Sorry Kellie, but did you really expect me not to 😉? I’ve learned and grown so much as an individual from this experience.  I’ve made so many friends during my stay including the very famous Happiness Salema.  There are so many great things that NSCC and VETA have achieved through their partnership and so many more to come.  I know that someday I’ll return to Njiro and finally catch my white whale.  this is Mr. Ben signing off.