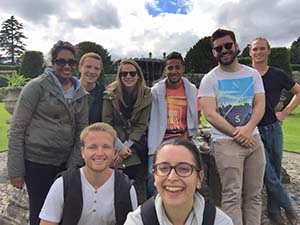 Entrepreneurship Summer Program in Scotland – Nova Scotia is Latin for “New Scotland”. After visiting Scotland, I can see why the new world settlers would have named it so. The similarities between the two are numerous. The weather and geography are practically identical. The weather changes every twenty minutes. The coasts and landscapes are just as beautiful as ours.

Things are different, though! In a lot of ways. For one, almost all shops close around 5:30 – 6 p.m. That was quite a shock when I went out at 6:30 to do some shopping. Many of the people seem cranky at first an unapproachable at first, but are incredibly nice once you start talking with them. Scotland, while very different, is also very similar. It almost feels like a home away from home.

Speaking of people who may seem unapproachable at first, the German students here are incredibly nice. Usually, I have had to to make the first attempt to initiate the conversation with them in in English. But once you get them going they are some of the nicest people you will ever meet. I have made friendships with many students abroad that I know will be enduring.

The relationships and bonds I have formed with not only the German students, but also my Scottish instructors and fellow Canadians, will be invaluable for me, and my learning going forward. As the world becomes smaller and more international these relationships will give me an absolute advantage. The opportunity that NSCC has offered me with this trip and learning experience is fantastic and I am be honoured to have been chosen for this program. I highly recommend travelling with NSCC if they have any interest in expanding their knowledge and horizons beyond Nova Scotia.