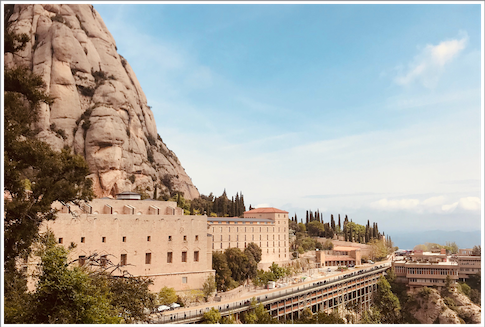 Hola! Today we woke up super early in order to get a earlier start on a trip outside of the city of Seville. Seville is absolutely stunning, but for our second day in this part of Spain we wanted to see more of the astonishing mountains that Spain is so well known for.

We traveled a couple hours to Ronda;the most beautiful place I have ever seen, built into Spain’s mountain-side. The views we saw along the way can’t even be put into words, so I highly recommend that anyone do this drive and head to Ronda ASAP because you definitely won’t regret it!

I found Ronda to be a little more touristy than Madrid or Seville, the streets were CROWDED with people. Possibly because it’s so small it looks like it has way more people, or more likely it’s just so beautiful that everyone flocks there. I feel like I learned more about the Spanish culture in Ronda because it was a smaller city and highly trafficked by thousands of tourists everyday.

I’m also learning a lot about myself on this part of my trip! Especially today being in Seville and Ronda,where they have way less people who speak any English so I was able to practice my Spanish speaking (it’s still got a LONG way to go).

I can’t wait for the rest of our trip so that I can learn and experience even more!

Hola! Today was one of the BEST days of our entire trip! I saw so many beautiful sights and learned so much. Another early morning but it was so worth it for the amazing time that we had. We traveled on a huge tour bus to Montserrat where we learned about the history of Montserrat, the name, who lives there, etc. It was incredibly interesting and obviously stunning. We hiked up to a cross on the mountain during our free time which was very difficult at points but it only took about 20 minutes each way, I highly recommend this hike. The view at the end is incomparable to anything I have ever seen before.

a wine tasting of uno vino blanco y deuce vino tintos (one white wine and two red wines) ((I’m loving all this Spanish I’m learning!)). We learned a lot about the history of the winery and how old it is. The most interesting part is that the winery has stayed within the same family since it opened MANY decades ago; the current owners young son is stepping into his fathers footsteps and most likely will take over eventually and continue to keep the winery under their name. I don’t want to leave!