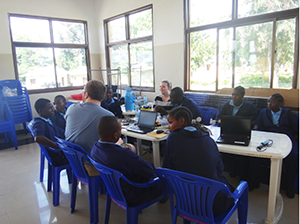 Mikumi Solar Water Project in Tanzania – Tanzania was my first International experience, and I am so grateful to have had this experience working as part of an amazing group on a project with common goals.

When I exited the plane in Tanzania, the first thing I noticed was the gush of heat and the smell of smoke. I wasn’t used to 30 degree heat at 10pm.

While waiting for my luggage to come through on the luggage belt, I could see a man from behind the flaps where the luggage circles back inside. He was excitedly waving to me with a big smile on his face. I hadn’t even been in Tanzania for 30 mins and I was already starting to experience how welcoming and nice Tanzanian people are. He came out from behind the luggage system and introduced himself, and so we chatted. My group members joked about how quickly I was able to make friends.

Around 6am the next morning, looking from the window of my hotel room, I could see a woman near the street making a pot of soup/stew and dishing it out for the people around. This is where the smell of smoke was coming from. People were cooking on open flames outside and it seemed to be a common thing.

The weather was amazing and I was wide awake and excided to start the day. We went on a walking tour of the city seeing all the sights and a fish market. Vehicles drive on the opposite side of the road, bikes passed cars on the inside and outside and in between vehicles, people travelled standing on the backs of trucks.

We got to experience the city transit and how incredibly busy and different that was. People were trying to sell things everywhere! It was a fast paced city and EVERYTHING seemed new! Our group stuck out from the crowd, and there were quite a few 180degree head turns.

I’ve learned that wide eyes and a big smile is how I walk into completely new situations and I’m grateful my peers pointed that out to me.

When we arrived in Mikumi, people were extremely welcoming and the students wanted to learn about all the different electronics we had. We took out all of the electronics we brought and explained what the different ones were and how to use our multimeters. I would have liked to have more time to work with the Tanzanian students from the electrical course because they were so incredibly interested in what we were doing. I feel we could have learned a lot from them. We left a few days for troubleshooting but had hoped we wouldn’t need them and instead have time to teach students soldering and discuss electronics. They were interested in the electronic components we had. In the end, I left my solderless bread board and unused components so they would have a chance to use them.

We were there to program and install a weather station with a display we made, as well as build and program a control system for a water aeration process. We made a timeline for our project work and we were sticking to it pretty well for the first week and a half. When a problem arose, it was worked around and we worked later to make up for any lost time. Students from Energy Sustainability, Mechanical, and Environmental were willing to do absolutely anything to help us with the electronics of the project, but there wasn’t too much we were able to teach in a short period of time. I taught some of our group members how to solder small components and how to use heat shrink. People helped us by mounting things and putting holes in things for us, as well as being a listening ear while walking through troubleshooting. They helped us save time and that allowed us to focus more on the programming and the design of the control system.

I couldn’t believe the amount of work everyone accomplished, help offered, and positive feedback from our group of students and project leaders. What a truly great team we had!

Eventually we were faced with two broken electronics with no way to replace them. We made the decision to make the control system for the water aeration our priority and tried to imagine any way we could still have it run. We altered the process to not include the two broken components but again it just would not work. We didn’t have any more time to troubleshoot. We had to leave it unfinished, and that was so incredibly difficult to do. But not all is lost. Everything is ready over there just waiting for working electronics. We plan to work with faculty from VETA and install a working electronics system this summer.

At the end of our trip, right before we were leaving, I sat outside of the airport to enjoy the last bit of heat and beauty I could before I left. What an amazing experience this project was! I would love to go back sometime.