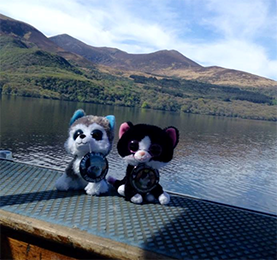 International Tourism in Ireland – Today we left the quaint town of Dingle (my favorite so far) and headed to Killarney, home of the largest National park in Ireland.   Killarney National park is over 4,300 hectares of lush green landscapes and mountains, McGillycuddy's Reeks, which are coincidently the highest mountain range in Ireland. It also was designated as a Biosphere Reserve in 1981 by the UNESCO. This will save it for generations to see and I think anyone that makes a trip to Ireland should take the time to visit it; you won’t regret the time spent there.  While there we took a boat tour of the Killarney Lake which shows some breathtaking sights of not only the mountains but Ross Castle.   After our tour by water we next took to Jaunting cars (horse & carriage) for a trip around the park by land.

After our time at the park we headed to our hotel and had some free time in which we could explore and do some shopping while waiting for our final activity of the night…a Ghost tour of an Abbey & hotel in the town that is reported to be haunted.  The two gentlemen that ran our tour (DB & Derrick, if I remember correctly) were two very well spoken and, if you asked the majority of the group, equally frightening, as there were many screams coming not only from inside the bus while going to the location but in the location itself.   I must say that so far Ireland in general reminds me a lot of Newfoundland, beautiful sights and very friendly people.  Cannot wait for tomorrow’s adventures….

(Note the two kitties that are in the picture are Tuxedo Stan (right) , who ran for Mayor of Halifax, in the plight for animal welfare, and his brother Earl Grey (left) that took up his fight after Stan lost his battle with cancer. Both are travelling with me and having their photo journey in every place we go.  Today this was at Killarney National Park with the mountains in the background.)