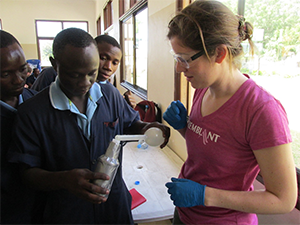 Mikumi Solar Water Project – It’s been a week since we officially arrived at Mikumi. So far, everything has been a blur of meeting new people, trying new things, and attempting to fit work in between. We are hoping to build a solar-powered aeration system that will soften the water at VETA Mikumi, a school we’ve partnered with, in preparation for disinfecting the water here in the following years. I’m part of a three-person team from the environmental engineering technology program. Our job is to test the water for bacteria, and to monitor the effectiveness of the softening system throughout its construction and installation.

Things are finally beginning to come together with the project. A problem with Canadian customs meant that we don’t have access to most of the lab chemicals we had planned on using, so our testing capabilities are really limited. This has forced us to come up with some really creative procedures, like testing for minerals using battery acid. It’s definitely been a learning experience so far.

The amount of interest and help we’ve had from the students here at VETA has made the lab work far more exciting. People from the school drop in all day to see what we’re up to, and we’ve been putting them to work. One group of automotive mechanics has been particularly interested in the water chemistry – they’ve been by three days running to help us conduct bacteria tests on the water at their school.

The openness of everyone here in Mikumi has just blown me away. Every day I feel like I meet fifteen new friends. My horrific attempts at speaking Swahili have served me well as ice breakers, if nothing else, and everyone is quick to laugh and help me out. I will leave here with an overwhelming feeling of being welcomed that I haven’t experienced anywhere else.