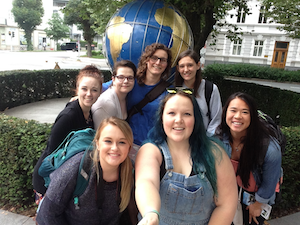 Women in Engineering Summer Program in Austria – The beginning of an adventurous life.

As a young girl I would always dream of traveling the world, just like any typical kid would who grows up within a small province in and even smaller town. However coming from a low income family I learned that this dream would have to be put on hold until I was older, had my own job and was financially independent and stable. As I grew up and began actually started to work at different jobs I also learned it would take lots of time and saving.

As time went on my dream of traveling began to slowly become more and more unattainable. As most students do, my life started heading down the typical university path. And as someone who had to support myself through the financing of my university, apartment, food and other common expenses. I began to feel that this was a dream I wasn't quite meant to fulfill.

However, a year ago my life switched directions and I left university and stated attending Nova Scotia Community College. At first I was scared and nervous that this was a switch shouldn't be making, but shortly after classes began I knew I was exactly where I should be. I loved my classes, the subjects and enjoyed the company of my class mates.

Shortly after school started I received an email about international exchanges and there was only one I could apply for with the program I am in. At first I wasn't going to bother to apply but there was a feeling in my gut telling me I couldn't miss this opportunity. To this day I am so glad I took the chance and applied. About three weeks later I had an interview and then found out I had been accepted to attended the international summer academy in engineering for women in Austria.

Google searches, asking seasoned travels and reading articles online is how I spent the next four months trying to prepare myself for what would be my first trip abroad. Culture shock was something I had never had to think about before and now I was going to be halfway across the world finding my way to Wels, Austria all on my own.

Up until I boarded my plane on July 10th, 2016 I had no idea what to expect or even how to process the fact that I was finally begin to fulfill that childhood dream. From the moment I landed in Munich Germany and found my way to Wels I knew that this was going to be the best experience of my life. Within the first 24 hours I had met 30 other young women from 12 different countries around the world. I quickly learned that even though our native cultures may be different and sometimes confusing and hard to follow, we were all just 31 likeminded young women with the vision to learn, improve and share our own stories and experiences.

I have learned so much from the classes themselves that we have had in the last two weeks, yet I feel as though I have learned even more from the women attending, hearing their life stories and adventures their experienced. Now I can't wait to continue my journeys around the world, but now not only to see the world but my new friends I've made here in Austria.