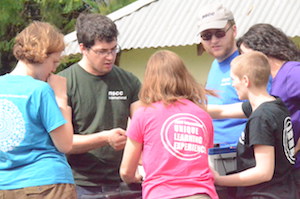 Mikumi Solar Water Project in Tanzania – This trip started off with a bit of a fall in excitement. I had never travelled anywhere outside of North America and even within North America I have only been outside of Canada once. So, safe to say my travel experience was rather low. With that in mind, I had been very excited to get this trip underway. My excitement was slowly diminished after the first two flights which had a combined total flight time of just over 11 hours, however, after the last and worst flight of them all we successfully arrived in Dar-es-Salaam and my excitement re-ignited.

We arrived somewhat late into the night and the sun had already set and although I had not slept in what felt likes day I was exceedingly wide awake on the drive to our accommodations. The sights and sounds were amazing. The architecture from one building to the next would change drastically within the same strip of road. Even the type and grade of concrete would change from one building to the next. There didn’t appear to be any regulation between buildings, even the ages of buildings varied greatly, ranging from old and rundown to perfectly new within only a few buildings of each other. Unlike in Halifax, were there are clear divisions between residential, commercial and industrial areas. It seemed like things were just built wherever there was a place to put it, or in some cases, even where there wasn’t places to put it. It was an amazing experience, and I look forward to seeing what else Tanzania has to offer.