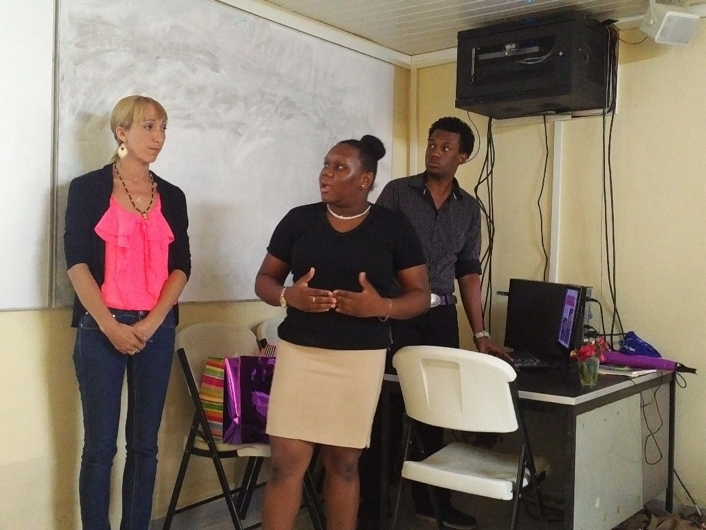 Cultural Entrepreneurship & Documentation Program in Grenada – Grenada was called the land of spice for many years but after staying for 5 days here, I think 'the land of paradise' would be more appropriate.

We all arrived at the Halifax International Airport with enthusiasm, a little nervousness but most importantly, an eagerness to travel and meet new, intriguing people from Grenada ??. We waited so long for the chance to make our experience a reality, after nearly 10 months of research about cultural differences and similarities.

Even before getting on the plane we all had individual challenges to overcome in order to take the next step and physically fly south for 5-6 hours to the West Indies where the island of Grenada sits.

The flight went well. We arrived at the Sheridan Hotel in Toronto later in the evening and with so much adrenaline running through our minds and hearts, it's likely that anyone could fall asleep that night before 2:00am.

Tired but unbelievably interested, we boarded the plane to Grenada at around 6:00am the next morning.

Arriving in a sweater and pants, I exited the plane and was greeted by an exotic type of heat never felt before in Nova Scotia. My first thought was "wow, I need shorts and a t-shirt asap."

There were so many friendly smiles and hugs at the airport. I could see there were some very special friendships previously established. I hoped to one day also share in these familiar welcomes!

By the second day, after our presentation of NS, instead of going back to hotel, we went with the kind, warm Grenadian students through city – it was amazing! So Hot! So New! So different! We walked through the tropical city of pastel buildings, seeing brightly coloured dresses of red, orange, blue, green and yellow. I looked around and it was as if time stood still. I saw a Mother holding her little baby and rocking her while smiling and kissing her giggling face. I saw older men just relaxing in the sun, some sitting in the shade, others doing daily duties on their boats that were gracefully floating on the aqua sea.

The next day we heard about Grenadas history by an incredible, educated and beautiful woman named Dr. Nicole Phillip Dowe. It was bitter sweet. She explained a chronological history of the island and included some moments of time that were very hard to hear, yet deserved explanation as much as the bright, proud moments. She spoke about slavery and also the Grenadian revolution. In fact, Grenada had a total of three revolutions for social and political reasons. I felt so humbled that she took her time to speak to us, especially seeing as how she was so busy, respected and such a beautiful person.

We did our Interviews outlining Arts and Crafts in Grenada. Our teachers weren't kidding when they said that interviews in the field would be way different than what we were used to in a natural air conditioned Canada. The temperatures reached 33 degrees, sweat dripping down my face faster and thicker then the hottest soccer game I've ever played in NS. We had many interviews to do and set up speed was equally as crucial as a quality, interesting interview. There were five or six in a group for each interview so team playing and understanding of our roles also played a huge part. Personally and professionally, I grew exceptionally in such a short time because of the balance of these expectations!

At the college we played Football / Soccer in  35 degrees. Needless to say I was exhausted within minutes!

At the hotel we swam in a pool lit with an elegant blue light late with clouds floating by and Caribbean music serenading our laughter ?Surreal, a dream, a beautiful painting that came alive -these are the only words I can use to describe my feelings while living on the island of Grenada.

At dinner with our group at the yacht club outside of the city, we met such friendly people.  Everyone was smiling and laughing and at that very moment, I realized it was all worth the challenges to get here. We were in the closest thing to heaven I ever knew. We are currently living in a place that I consider truly heavenly. The weather and climate make the island beautiful but it's the people who make it truly magical here, in Grenada.