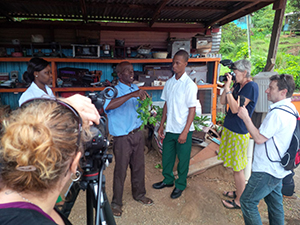 C-EFE Grenada 2016 – Hellooooooo…Hello from the other side………our first morning of shooting entailed filming our two TA Marryshow Community College (TAMCC) students, Kelvin Dragon and Shemeka Williams, as they made their way from their homes to school. It was a beautiful morning; sun was just coming up as we arrived in Kelvin’s neighborhood. We drove along a very rough road and stopped at the bottom of long, steep driveway. Up the steep slope we walked following Kelvin, past the grazing goats, and through the forest path, arriving at his home. As we filmed, neighbors walked by, all wishing us a “good morning”, some asking what we were filming and one even suggesting we needed to let the right people know that their road should to be fixed.

Next, we travelled to Shemeka’s neighborhood. Again, steep hill roads (really made for only one car to pass), and winding paths for people, dogs, goats and roosters all to pass. We filmed Shemeka as she walked down to the main road to catch her bus. Along the way, she greeted neighbors; pointed out the views and made sure the film crew (Kellie McMullin and I) didn’t get hit by a car. The view of Grand Anse Beach was spectacular from Shemeka’s Road.

Kelvin and Shemeka are both pharmacy students in their final year at TAMCC. They graciously agreed to let us film a bit of their daily lives to use as part of a promotional video highlighting the partnership between NSCC and TAMCC. Both students had participated in last year's two week Cultural Entrepreneurship and Documentation Program (CEDP), an inter-disciplinary learning program for students and faculty from both colleges. The skills they gained during those two weeks made them total professionals in front of our cameras.

We went on to film  both students at Mr. Joseph Rome’s museum, a local expert on herbal home remedies and a collector of local oddities. Shemeka and Kelvin first visited Mr. Rome last May with the other CEDP students. This second visit gave them both the chance to ask more questions about local plant use (an area of interest that they have both pursued further since our program last May) and it was a great setting for filming their interaction. Mr. Rome has created a quirky and informative museum, a wealth of knowledge can be found in Rome!

I want to thank our Light and Umbrella Boy, Zoran Kondali and our Bounce/Tripod Girl Katie Orr, for all the support. What you make happen with NSCC International is astounding and I’m so grateful for having the chance to be part of it. And finally a big thanks to Kellie McMullin. It was wonderful to work on this project with you, now we just have that editing thing to do, hardly anything really, I’m looking forward to that process and excited to see what the end result will be! Thanks for the deadline Zoran, we all need a deadline.