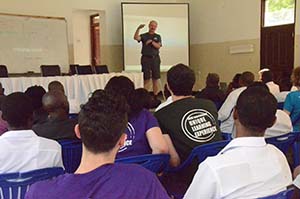 Mikumi Solar Water Project 2016 – The NSCC Mikumi (Tanzania) Solar-Water Project involves use of solar energy to address water supply problems in developing countries. When I learned that I had the opportunity to return to Tanzania as part of the onsite 2016 project team after having participated in 2015, I did not hesitate to say “Yes!”

The team is a versatile, strong, interdisciplinary group consisting of nine students from the Mechanical, Electronics, Energy Sustainability and Environmental Engineering Technology programs and two faculty. The team arrived in Dar es Salaam, the big city in Tanzania, after a 24 hour trip from Halifax. We had a day to get our bearings which included a walking safari around Dar and a wonderful meal at an Ethiopian restaurant. The next day, we drove the 400 km west to a Vocational Education and Training Authority school in the small rural town of Mikumi.

We received a very warm welcome from the VETA faculty, administration and students. It was great to reconnect with the friends I had met last year.

We set to work immediately. The idea is to build on last year’s project in which case a solar water well pumping system was installed along with a data logging system to monitor the groundwater supply and well performance. As well, the water supply was found to be contaminated; typhoid is common. This year’s project involves installing a weather station to work alongside the data logging system already in place and to work towards a solar thermal pasteurization approach to disinfect the water supply. This means using a solar heat exchanger to heat water to 75 oC to kill pathogens instantly.  However, the water was found last year to have strong scaling tendencies which would render the solar pasteurizer heat exchanger useless. What to do? Further study and testing of the water back in Canada resulted in the discovery of a unique way to limit the scaling tendencies of the water without the use of chemicals so that the solar thermal pasteurization approach is feasible. Such a treatment will also save the plumbing system at the vocational school from intense scaling tendencies. Therefore, the major focus this year is to set up a prototype treatment system to minimize scaling tendencies of the water as a proof of concept so that solar thermal pasteurization will become feasible.

It is tremendously satisfying to work with the Solar-Water Project team and the wonderful people of Tanzania towards providing safe, dependable water supplies in a sustainable manner.