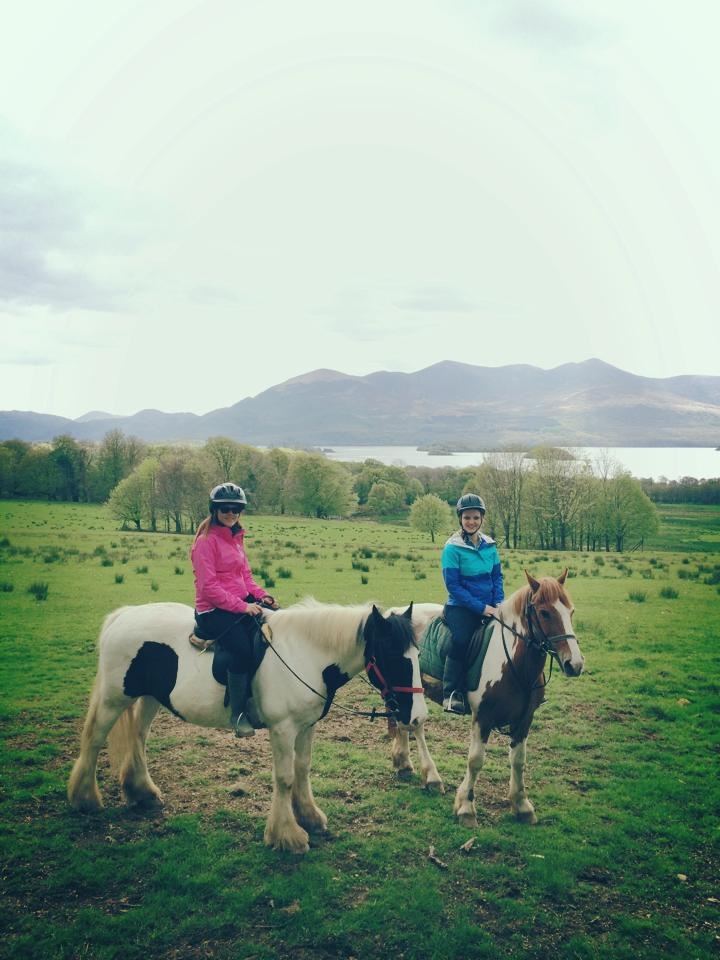 International Tourism in Ireland – On Monday April 28, 2014 we left Dingle and traveled to Killarney. In Killarney we board the waterbus and went to explore the lake, Lough Leane. We learned of the different islands in the lake, such as "mouse island" which is also called the "honeymoon" island. It's called these names because it is the smallest of the island and it is that it can only fit two people. The boat ride was fun and you were able to view the Killarney national park from a different angle. We also got to see the Ross Castle; the castle was built in the 15th century. We also viewed the ruins of a building that monks would go to live and pray. The tour guide/driver also told us of the deer that lived in the park and that you could tell where the park ended by the tree line.

After the boat tour we went on the jaunting cars where our driver was quite the comedian. He loved to tell us funny little things and say "right it down, that's a good one". He told all about the leprechauns and their tomb stones, Olympic swimming pools, cordless bungee jumping bridges; all of which aren't real. He also calls the rocks that are visible in the lake rockodiles. It was a great experience to go with him because he was constantly making you laugh and it was never boring.

Once we returned back to town we had the opportunity to explore which I did not, I went to the Killarney riding stables and went horseback riding. This was so much fun because there was only two of us and we went through the park and seen it from a third perspective. We saw lots of hares (rabbits) and had great views of the mountain ranges. The horses were great and although mine liked to push the limits by not responding right away he was a trooper. The ride was an hour long with some trotting and lots of laughs. To get to and from the stables we walked a half hour each way through the national park, which is beautiful ! We saw deer on the way back in a field and were able to slowly approach them. This was truly amazing because at home your not able to do that and rarely do you see a deer when walking through the woods.

The last activity most of the group did this day was the Killarney Ghost Tour! The group boarded a creepy bus that was decorated to scare you and listened to the folk lore tales of Ireland. We learned more about the fairies and the fairy rings. We also learned about a church on the ring of Kerry where a girl appears in the vehicle when driving past.. This was scary because we will be driving the ring of Kerry tomorrow! The bus stopped at a haunted hotel where the group was encouraged to take pictures of anything and everything because orbs appear in the pictures! Many people had them appear in their pictures ! The last stop was the Muckross Abbey and grave yard, this was the best stop because while the tour guide was telling the stories the other guide was jumping out and scaring us. While on this trip I learned my last name was originally spelt Keogh not Keough but got changed along through the years. When we stopped at the graveyard I seen a headstone with the name Keogh!

I am truly loving Ireland and can't wait to keep exploring and having new experiences, I'd like to say this is a once in a life time experience but I know I will be back!