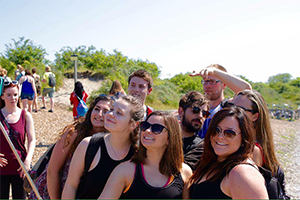 The first week abroad I spent exploring, getting used to riding my new bike, learning about the Dutch culture and norms, and adjusting to the five hour time change. The major culture shock I experienced was figuring out the biking routes, learning the proper signalling, and trying to not get hit by ongoing traffic.

In my second week, I have been travelling on my own through the city to explore my new surroundings. The roads are very small and narrow, and what I had not discovered yet was that there were specific sides of the road bikes were supposed to drive on, similar to driving a car. Riding down the right side of the road, I noticed that an incoming car was about to cut of my biking path. I pulled to the left side of the road, to pass the car, not looking at my surroundings. When I looked up, I was driving directly into a local man on his bike. I tried to stop, but forgot that Dutch bikes are a little different than the bikes I’m used to and I crashed right into the man, who flew over the front of his bike onto a restaurant patio. His bike then slid into a local woman who had been biking behind him, and knocked her over, breaking her new glass vase. Everyone was unharmed, very polite, and forgiving, but I was mortified. I learned an important lesson that day, always learn and follow the rules of the roads when going to a new city, and especially a new country.

NSCC accepted five students to come to the Netherlands this year. We flew over together, and when arriving got split into two residence buildings. This was beneficial, as it gave us an opportunity to meet other students in our program and expand our friendships. On our first day of school, the program got split into smaller groups to complete our major projects. I was placed in a group with all Americans studying different aspects of business. Together we created an idea for Philips to help them increase their electric razor sales within the younger market. This Wednesday we will be pitching this idea to a jury in a Dragons Den style meeting. Whoever wins these presentations moves on to present their ideas to the CEO’s of Philips. I am excited to see if we move on to the second round.

Overall, this trip has been an amazing experience because the program at Hanze University has solidified my understanding of marketing and international business. I am thankful that NSCC accepted me into this program, and will be applying next year, to come back as an intern.

**The picture was taken on the island of Schiermonnikoog yesterday. It was a beautiful sunny day on the island, we went for a bike tour, and spent the rest of the day on the beach.