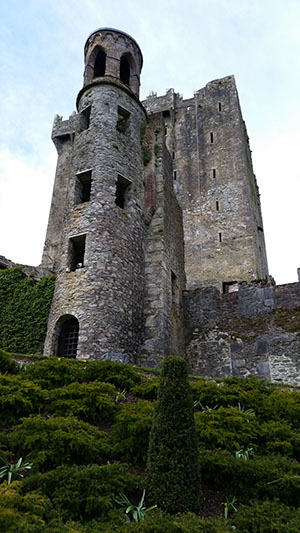 International Tourism in Ireland – A light sprinkle of snow covered the mountain tops around the ring of Kerry which could be seen from our breakfast table Friday morning. We took off from Killarney for Blarney castle in Cork which was built in 1446 by Cormac MacCarthy and is the third structure to be built on this site. There we got to explore the exstensive grounds and kiss the famous blarney stone!

With over 60 acres of sprawling landscape and parkland, there is something to be seen around ever bend and corner at Blarney Castle and Gardens. From water falls, to the fern garden and even Ireland's only poison garden – which includes interesting plants from around the world, even ones like Wolfbane and Mandrake from the popular book Harry Potter.

For over 200 years millions have made the climb to the top of the Castle to kiss the stone to gain the "gift of the gab". It was sent to the property by MacCarthy, but it wasn't until years later that it's powers were revealed by a witch who was saved from drowning.

From the Castle we travelled to The Rock of Cashel – this property includes a 12th Century Round Tower, 13th Century Gothic Cathedrial, 15th Century Great Hall and Castle and the original Cross of St.Patrick. It is here that St.Patrick is said to have baptised the first Christian Ruler – King Aengus.

Kissing the Blarney stone had always been one of the first things I thought of when it came to the country of Ireland, and it was a great oppertunity to have finally have checked it off my bucket list! The Rock of Cashel was an unexpected bonus to me – as I had not read up on it prior to visiting. Both Castles had breath taking views and articture that I couldn't compare to anything I had seen before!