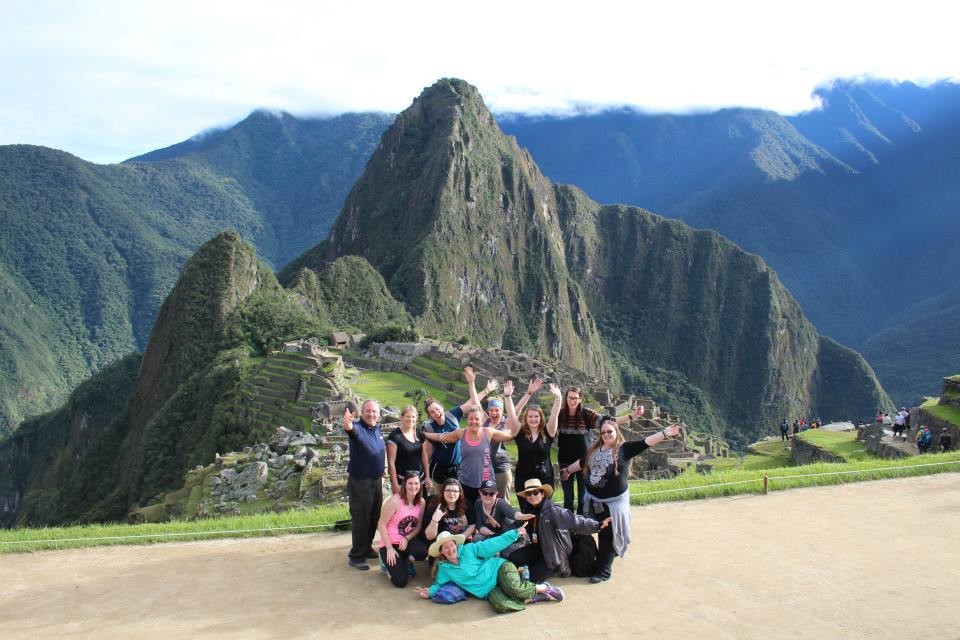 International Tourism in Peru 2015 – A Day of Reflection at Machu Picchu. A requirement of the, in class, International course was to do research and reflection on a particular area within our destination country of Peru. I had watched a documentary on Machu Picchu, and wanted to put this information to paper. I knew from the moment I watched the documentary, I had to go there in person. It’s now, also an Official New 7 Wonders of the World, in the Cusco region of Peru. I was super excited to have the opportunity to visit Machu Picchu, because it is so full of amazing history, culture, heritage, and incredible engineering feats that still hold the construction and terraces together on the mountain top today!

To get to Machu Picchu we had to take a bus to the train station in Ollantaytambo. Then take the train, which was an experience in itself, to Machu Picchu town. That’s what we called it. You can only get there by train. Then we took another bus on a switch back dirt road, up to the Incan ruins. Let’s take a small moment to talk about the train. It ran along the edge of the rainforest. It had windows in the top, so one could see all the awesome mountainscapes all around. The train had a Harry Potter jiggitty, rock-you-back and forth kind of feel. Loved it!

Going through a tunnel!

Back to Machu Picchu, Darcy was our guide, and he took us to every nook and cranny. He had us up at the crack of dawn and moving by 6 am. Excellent plan Darcy! There was a crowd of people when we arrived, and the crowds grew larger and larger throughout the day. It was surreal to actually be standing on the mountain with the Incan ruins I had researched months ago. There really are Lamas up on the top. At this present day, there are many protections of the site to help preserve for the future. There were many security guards to enforce respect, and boundaries. Nice to see the care and effort put forth.

To describe how I felt would be how it would feel to be the king of the castle, or be on top of the world! To be a part of something with grand importance. Machu Picchu is filled with temples, and symbolic places, and symbolic rock formations. The rocks are formed and placed specifically, so when the sun shone at a specific time of year, it would cast a symbolic shadow. Different types of rocks were used to signify agriculture terraces, from important religious or royal sections. Seeing the rock placements up close made one appreciate the hard work, knowledge and skill involved.

“Home Depot”, Darcy’s explanation of the scattered boulders left randomly, was the proof and indication of hard times. Builders and farmers went off to fight against the Spanish invasion, and everything at Machu Picchu was left in limbo, and forgotten, until found again in our 20th century. Darcy was very proud to note that Peru’s aboriginal people discovered Machu Picchu before the American explorer, because the explorer needed guides to get there.