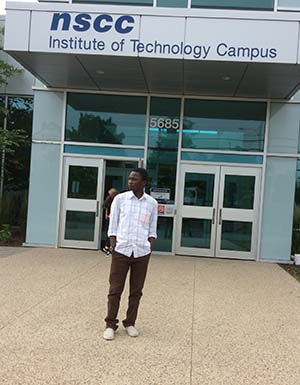 ISTEP Tanzania Nova Scotia Study Tour – After long Safari but the pleasured one from Dar-Zurich-Montreal-Halifax and at last Cambridge Suites Hotel for a night where my life started. Actually I didn’t expect if could make it but for the loves of God at last I made it safely.

The next day things were awesome being picked up from Cambridge Suites Hotel for Eco-Cultural Tourism Study Tours in Lunenburg as a port town. We started Experiencing Hands-on Heritage at Ross Farm Museum which the history step back in times and experience life as it once was in Rural Nova Scotia, using skills, animals and tools which was operating the farm of captain William Ross settled in New Ross in 1816 with his family, and 172 disbanded soldiers were “was awesome experience to me.

And then to Fisheries Museum of Atlantic where displaying feature the world’s largest collection of Bluenose artifacts and a tribute to those lost at sea from the port of Lunenburg, it was “fantastic” history to me. And then sleeping in a lodge of a person who advocates a rigorous moral code which know as Bluenose, that gave me another exciting moment.

Good things continued to Public Libraries/Lifestyle Centre in Bridgewater. The Lifestyle Centre which offers area for exercise, social and Cultural activities and for developing well-being of the people and for us as group having fun with Children and then presentation to them and all people who were there at a time was “cool”.

“Ghost” storytelling tour was waoooo. Actually I expected to catch or see the Ghost but at the end of the tour I didn’t catch, see or hear the voice of the Ghost but it was excited tour, and the tour guide herself was also one among the attraction as the history was. Thanks to “Ashlee a Tour guide”.

Training tour continued to Black Loyalist Heritage Centre. A Black Loyalist was an inhabitant of British America of African descent who joined British colonial forces during the American Revolutionary War. Many were slaves held by Patriot rebels, and joined the British in exchange for The Crown's promises of freedom. The area is well equipped modern technology “ The history took me back years and years a go.

Here we go now is YARMOUTH,

Yarmouth according to Nova Scotians is a port town located on the Bay of Fundy in southwestern Nova Scotia. The town is located in the heart of the world's largest lobster fishing grounds and as a result receives Canada's largest lobster landings each year. “The town and human activities were very interesting to me”

Tour to NSCC Burridge Campus. The campus is totally good. One event which was more excited and honored to me was the whole welcoming process, Meeting with great people in Yarmouth Government like Mayor and others was “waoooo to me”.

Experiencing the beauty and natural wonder of the Parks as the only park in CANADA that is designated both a National Park and a National Historic site. And exploring the wilderness trails, lakes, and rivers – on foot or looking people doing kayak, and then sleeping in MERSEY RIVER CHALETS “was pleasure to me.

Mi’Kmaq History. As a First Nations people indigenous to Canada's Maritime Provinces and the Gaspé Peninsula of Quebec. And we were told that others today live in Newfoundland and the northeastern region of Maine. The history impressed me a lot.

“Kilimanjaro to Kejimkujik” presentation was awesome; people came in great number with their lovely Children. One thing also here was good the tittle of the presentation “ KILI to KEJI” awesome tittle designed.  “Thanks to Katie and Kellie”

Then Back to YARMOUTH

Having a chance of going back to Yarmouth for me and Mr. Saronga with Mr. Tony was another opportunity of learning to me. We did a lot of Training tours to Museums in Yarmouth with Mr. Tony and his wife Patty.

‘The trip was fun and wet because of the waves, and high speed Boat pumping here and there. Before the trip I thought was just normal trip but after going very far where I couldn’t see anything out of water, birds, and my friends in the boat, I started praying. Then few minutes later we started gambling showing Whales, oooooh there,oooooh here. And at last we were lucky we saw almost 4 Whales, and good enough they came underneath of our boat and starting making fun water games with us. “Fabulous trip”

“Strengths, Entrepreneurship and Great Teachers Day workshops” at NSCC IT Campus were really healthful to me and back home Tanzania for our students. Because I learnt a lot of things in those workshops, so I will use the knowledge and skills to teach Tanzanian upcoming generation. Thanks to facilitators.

Having the “BARBEQUE RECEPTION “with NSCC graduates was fantastic and true love to me and the group in all. Ahsante Sana guys-it was awesome.

Peggy’s Cove is said to be the home of over 160 historical lighthouse place is very attractive a lot of giant rocks, much ocean waves as well as area scene itself.

NSCC Campus Tours in AKERLEY and WATERFRONT and Project planning meetings were our last training tours/activities before on 24th July 24, 2016 traveling to Truro for CCEDP course. The all two campuses are fantastic, well equipped and nice scene viewing.

All in all, I have a lot of people to thank for the whole training tours and those who think about me coming to CANADA. Anyone who gets to read this blog you are the one I thanked too.