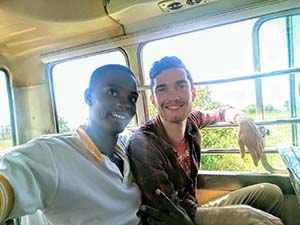 Mikumi Solar Water Project 2016 –  May 7th – 8th – Today we landed in Dar Es Salam, Tanzania. It is a still a surreal experience even though I’m finally on the ground. The energy in this city is beyond description, the entire place smells like fire and sweat and I mean that as a great compliment. It is this powerful mix of primal feelings and urbanism all mashed together in a maze of winding streets and new construction.

We were given a walking tour by Ludavic, one of the faculty at the Mikumi vocational school. I’m 90% sure he got very lost at one point, but this lead us into areas of the city we would never have had a chance to see. The smells, sounds and sights of the city are overwhelming at first, but soon enough it just turns into the white noise that is Dar Es Salam. When you walk down the street dodging ancient Chinese trucks as they bounce over potholes, and repeating “Hapana asanti” (no thank you) to the endless waves of people trying to sell you something, it is hard not to feel the energy and excitement in this city. In the morning, I wake up to the muezzin (the Islamic call to prayer) flowing into my window as the city begins its day. It’s already warm by 6 or 7 am, and the smell of street food easily reaches my window. It is a very good way to wake up.

One thing that you can only laugh about and move on, is how much we stick out over here. A bunch of pale Canadians wandering wide eyed through Dar Es Salam, it must be quite the sight. As exciting as this city is, it is exhausting! I will be glad to arrive in Mikumi and have some work to focus on and a little bit more green around me.

Before we left, we were treated to a SPECTACULAR Ethiopian meal. I say spectacular but that word doesn’t even come close to describing it. After a few incredibly cheap local beers, massive bowls were brought out and put in front of the group. The lids of each bowl was simultaneously lifted off revealing steaming piles of curry. You eat only with your hands and small strips of bread, reaching over each other to grab chunks of curried meats and vegetables. We inhaled this food only stopping to state in amazement how exceptional it was.

Apparently eating out of the same bowl is a symbol of bonding in Ethiopian culture, and I would have to agree. As we reached over each other, sharing bread and laughing about how good the meal was, it really was a communal experience.

After a long bus ride through the truck filled highway leading from Dar Es Salam we have arrived in Mikumi vocational school, known mostly as the VETA. The day was filled with meeting faculty and students of the school, and I can’t fully express how friendly and kind everyone here is. I have never met a people so easy to laugh. At each other, at themselves, at our clumsy Swahili, it doesn’t matter everyone loves to laugh. There is no mean-ness in it either, just an appreciation for every bit of humor throughout the day.

We joined up with some of the tourism students for a tour of the campus, quickly breaking off into small pairs. They are so proud of their country, and superb with their English so there’s little gaps in the conversation. I ended up trading long lists of Tanzanian facts for Canadian facts to the great enjoyment of both sides. Most people here haven’t seen tattoos before, so mine were getting a lot of attention. The look I was given when I explained that they can’t be washed off was priceless!

As soon as we could we have begun work on the project. I won’t go into great detail here, but overall the project is going well. There have certainly been a hitch or two here and there, but for every piece of bad luck, we’ve had some exceptional luck in return. There is still a lot to do, and still a lot of un-knowns, but I’m confident that we can overcome whatever is thrown at us. The only thing slowing down this project is how interested the VETA students are! More than once, I’m leading around crowds of curious students, giving tours of my own!

The VETA is only a few minutes away from the Mikumi national park. So obviously a safari was a non-negotiable event. We piled into an old bus with no air-conditioning and were joined by the tourism students at the school. I believe we were meant to be their exam!

The best way to describe the park, is exactly as you are imagining it. Wide plains stretching out to the horizons, with great green mountains framing a brilliantly blue sky. As our old little bus, rattled down roads it had no right to be on, it did not take long to see some animals. Giraffe, impala, wildebeest, buffalo, elephants, hippo, and more birds than you could count became almost a common sight, but not one we grew bored of. We even saw one very sleepy lion close enough to the bus that I could have reached out and touched it.

I don’t think we could have asked for better tour guides than the students. Every time we saw a new animal or tree, they would stand up and try and outdo each other in front of their teachers. Once again that constant sense of humor filled the bus with belly hurting laughter again and again. In the few moments without animals both me and my guide bombarded each other with questions. What kind of music did we listen to, favorite movies, the kinds of animals in Canada, and if I was married were all common questions. By the end of the safari my throat was sore from talking, and my brain filled with fresh Swahili words.

By evening we had to part from the students as we were sleeping within the park. The amenities at the VETA are more than adequate but at our first lodge they were luxury! Hot showers, big beds, fantastic food, we were all overwhelmed with the quality of our stay. I remember talking late into the night by a crackling fire looking up at some of the most amazing stars I’ve seen, and feeling my jaw hurt from how much I was smiling.

The lodge was right in the park, so visitors were a common occurrence. During dinner, a herd of elephants glided past us, less than 40 meters away. The gracefulness of creatures that large continues to mystify me. While we had nothing to worry about with the elephants, there are sometimes more dangerous visitors to the lodge. Because of this, local Massai patrolled the trails watching for animals. Armed only with a short spear and a stick, you might doubt that these quiet men were ready to fend off a lion, but the intense calmness just emanating off of them gave me complete confidence in their abilities.

After a bouncing down a few roads that barely qualify for that title we returned to the VETA ready to dive back into the project. Again I’m not going to bore anyone with a technical summary of our work, but it was going well. The tanks were in place, plumbing under way, solar system tested and operational. With all the little hiccups, we couldn’t have asked for better progress. All of the students and faculty here at the VETA are more than eager to help, and everyone wants to be involved, we were never at a shortage for helping hands.

And never at a shortage for conversation! The walk up to our rooms would sometimes take twice as long as you’re ambushed by new friends, and curious new-comers. I can confirm that the selfie has made it to Tanzania, and I am in more than my fair share of them!

A group of students offered to take us into the nearby town and show us around one night. This was an opportunity we couldn’t pass up! Once again we got to see places we would probably never otherwise have been able to see, and was an opportunity to see some very real parts of Tanzania. I have been going on at length about the beauty and happiness in Tanzania, but it would be exceptionally dishonest to fail to mention the poverty. Tanzania is a poor country compared to Canada, and it is very visible. We as Canadians can never understand the privilege that we have, and how ridiculously fortunate we are for having being born in our country. The people here work very hard, and they are often working to simply survive. I am glad I have an opportunity to help here, but is only a small amount that I can do, and there is a lot that could be done. I am starting to run out of words, but I truly want the reader to appreciate both the incredible beauty and struggles of this country. It is not a postcard, it is a very real place in all ways, good and bad.