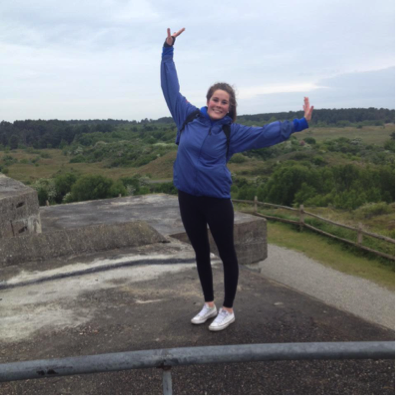 Doing Business in Europe Summer Program in the Netherlands – So today is June 1st meaning that I’ve been in the Netherlands for 14 days and I am having one of the best times of my life. People in my dorm are so friendly that I knew everyone’s names by the end of the second day I was here. The first night myself, and two of the other people from NSCC had arrived, Bonnie and Jen and we were so jet lagged that we were awake until 2am. Our new Italian friend Stefano who we met that day cooked us pasta this late at night, he officially became our Italian saviour!

So far since we’ve been here we have gone on a Dutch tour, spent a day on an island, and this Friday we are headed to Amsterdam. Everything about Groningen is amazing except the fact that the weather is even less predictable than Nova Scotia! (Who knew this was possible?) I have made so many new friends and the city is so beautiful I never want leave!

**This is a picture of me standing on top of an old radar base we got to explore while on the island, it was also filled with cows and a beautiful sandy beach !