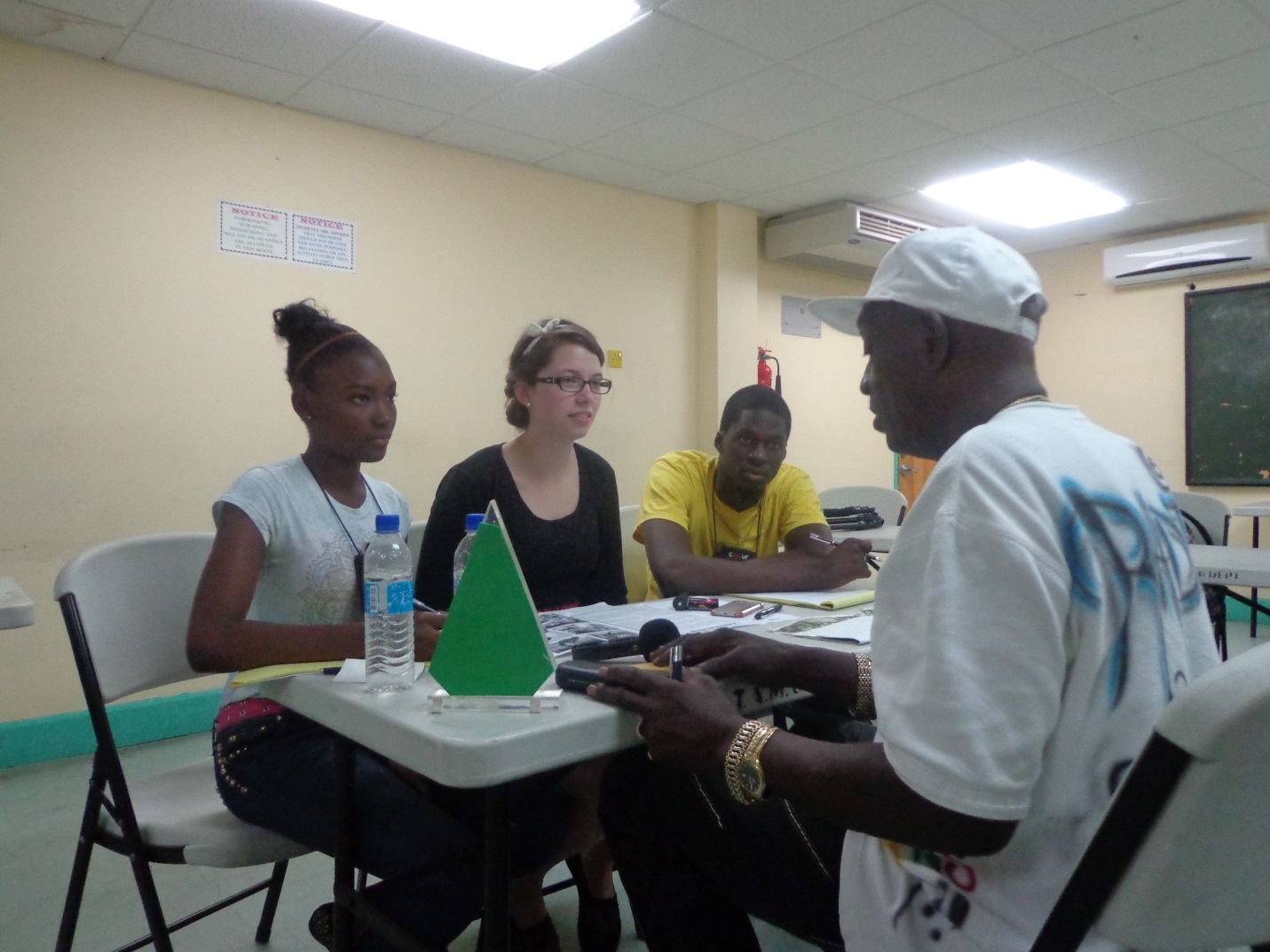 Cultural Entrepreneurship and Documentation Program – We've been here a week so far, and we have done and seen some pretty interesting things. On Tuesday, we visited De La Grenada Industries, which is a company that makes tons of different products from local resources such as nutmeg, mace and various other spices/ingredients. We were lucky enough to get to sample some products, and they were great. I tried the mango curry, guava jam, a nutmeg BBQ sauce and a nutmeg syrup. My favourite was definitely the BBQ sauce, it had a nice kick to it and definitely would've tasted good on chicken. Wednesday, we visited the Belmont Estate cocoa factory where we got to see the cocoa beans in all of its different stages (from being picked, to fermentation, to drying, etc.) and try some end result, chocolate. They had two different types of dark chocolate and chocolate tea, I was very impressed by both. I especially enjoyed this visit because they also had animals at this location including goats, cats, tortoises (including baby ones we got to hold) and a talking parrot named Rainbow (he/she was VERY entertaining).

From here, we then went to the River Antoine Distillery,  where they have been making rum from sugar cane the same way since the 1700's. This place was also neat because they used all of the old pressed sugarcane for means of fuel. They have a restaurant at this location (which looks very new) and it had the most beautiful view, it was all open and you looked right out at the sugarcane fields which were surrounded by palm trees. It was absolutely breathtaking.  The other groups of students held interviews with individuals at all of these locations, my group did not start interviews until the next day.

My first interview Thursday morning was held at the college, it was unexpected to have this interview set up so I was excited to get one done and out of the way. I interviewed a 71 year old Grenadian gentleman, who was the founder of Youth in Grenada. It is a group that teaches traditional Grenadian dances (so any of the dances that would be found in Carnival essentially). He was also responsible for bringing Carnival over to Miami, which is where he lived for a number of years. He was very passionate about making sure that these Grenadian traditions were passed on to the younger generations, it was really inspiring to see how passionate he was about keeping the Grenadian traditions alive.

Our second interview took place at an individual’s house. Which, I did not realize until we were on our way there (we being me, two TAMCC students and the DR who works with the college). The day before, a group of two NSCC students and one TAMCC students were doing an interview (supposed to, the interview was relocated) at an individual’s house to which they were all informed of. So, I figured that if my group were to be in the same situation that it too would have been stated. Unfortunately, it wasn't. Now, this might not seem like a big deal because there shouldn't be anything wrong with going into someone's home. But you have to keep in mind where we are. The four of us started our adventure out to this gentleman's house, which no one knew exactly where it was. We actually drove by the turn off and had to turn around, then we had to ask multiple people along the side of the road where this man lived. Everyone seemed to know where he lived and pointed us further up the hill. We were then driving up a road big enough for one vehicle on a large hill, this sort of wasn't very comfortable for me since we really don't have any places in Nova Scotia (or at least that I drive on) in that condition. As we were driving up, I was taking note of how tiny the houses were. Mostly all of the houses were made of concrete (which is normal here) and although small, they seemed nice.

Eventually when we did find out where this man lived, I was then surprised that we were going to conduct the interview there. I know poverty is a thing in a lot of these countries, and that some people do unfortunately live in houses that are tiny or really aren't houses at all but being in one of these houses was really hard for me. The house we were in was a small wooden house that was on top of four concrete legs (about 5 feet off the ground, no clue how it doesn't fall over/off) and the whole area of the house, two small bedrooms and a kitchen/living room, was so small that it would have fit inside of my bedroom. Inside of my bedroom. The whole entire thing. This was probably everything this man owned, and it was just really shocking to be invited into it. I then wasn't sure how this man would feel about a white Canadian girl, who is not rich but rich to him, being in his home. My iPhone cost more than everything he had. But to him though, living that way is normal and same to a lot of Grenadians, it is all normal. Which I was very aware of, but the whole situation was still just shocking. There was nothing covering the windows, what is it rained? There was no washroom, where did he shower? What decisions did he make in life that lead him to live this way? Did he live here alone? Where did his children sleep? Has he always lived here? Why isn't he wearing a shirt? Does he not have a shirt? (Yes, for some reason he had no shirt on). All of these questions and many more ran through my head as we stood there (he only had one chair, it was one of those plastic deck chairs) doing the interview. I was supposed to take pictures of his costume but I didn't feel right asking. Even though that living situation to me, and probably most Canadians is unbearable, it is all he has. But you know what, he was happy. And he was a really nice man, which shows that you don't really need a lot in life to make you happy, so I was glad that I could have at least taken that from this experience. But if I didn't think culture shock was a thing, I definitely do now. Because I have experienced it, and I did that day after I left his home. It was not that I was disgusted or disappointed in the way that he lived, I wasn't. It was just so sad. Yeah, sad to realize that this is a reality for a lot of the world. When you grow up as lucky as I, or most Canadians did, you often seem to forget that you have it so much better than most of the people living anywhere else in the world. I have a roof over my head, my parents have a beautiful home with a lot of land, I have pets, a vehicle (and spare vehicles, my father likes cars), an education, clean drinking water and so much more that we use every day and do not even realize how so many people around the world would die for. This really has just made me think about how lucky I am, and not to take any of it for granted.

We are all so much more lucky than we ever realize.