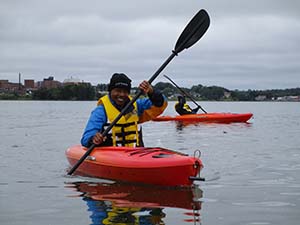 ISTEP Tanzania Nova Scotia Study Tour – Arriving in Canada we first set leg at Halifax International Airport. There was no much to be expected since it was a completely new experience. The type of people we would find, foods, culture and the country itself were issues of great concern. I recall meeting the country farmers at Ross Farm Museum and on greeting him “How are you sir?” and he would say in ‘country side’ accent “No proooblem” it was admired by everyone. This was our first tour visit. The visit at Luneburg’s ocean side and the museum were so experiential as there were rich in history about the fishermen’s activities and beliefs. One evening, informed that there will be a “Ghost night visit” I was filled with anxiety as I imagined about ghost visiting!. This was a shocking news to folks from Tanzania since the worst was expected. Rest assured that what transpired out of it remains history.

The visit to Yarmouth’s ocean side was awesome with kayaking and canoe paddling experiences. Some of us were afraid of drowning into the Canadian waters since swimming was another skill yet missing. The amazing experience of Black loyalists’ history in Shelburne was a special inspiration as far as black endurance during slavery era regards. Their survival in triangulated huts with a hole inside to rid themselves of snowy weather reminded me of the Ancient Amboni caves of Tanga and the unique Kondoa Irangi carvings and ancient drawings. I will always remember the slavery and coercive work relation that is well archived embracing the roots of existence of a great state of Canada

Little did we know of the significance of the Peggy’s light house as well the Pirate Island off from shores of Peggy’s cove. The myriads of sounds from waves in the Atlantic waters of Canada always made my days. The visit to Truro NSCC campus will always stand out unique given their approaches to training and assessment. BOPPS will always be upheld and cherished during training at VHTTI and elsewhere.

If anyone now asks of my experience in Canada, I would always say like George (from Netherland) said to His young brother who was coming to Canada“….. You’re coming to Canada, and Canada is a Land overflowing with Milk and Honey……” However, I would skip his caution, saying “…BUT you have to find your own cows and bees”. It was an awesome and brotherly caution that reinforced the essence of hard working for a living. With such a rich experience as this one, I feel honored and extremely humbled to have taken part in fulfilling the ISTEP 5 mission under NSCC/ VHTTI partnership. Now remains the knowledge and experience transfer to the younger generation for a better future of both countries. From Kilimanjaro to Kejimkujik have I had good enough, an experience to share with colleagues in Tanzania.

Many thanks to all persons who brought this mission to success.