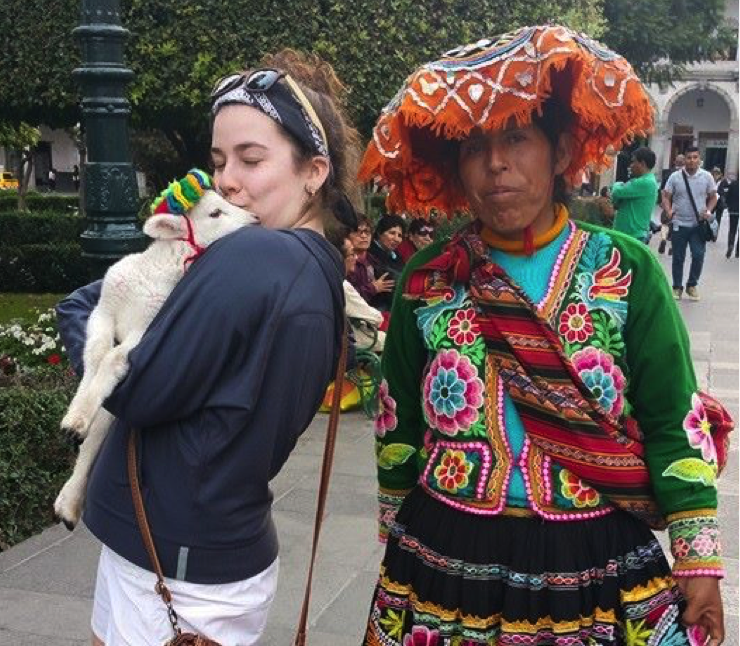 International Tourism in Peru 2015 – Have you ever kissed a lamb? I have.

Walking down in the main square of Arequipa, our lovely tour guide, Mapi, was telling us all about the architecture and history of the square. As interesting as it was, I could not help but notice a woman wearing bright coloured traditional Peruvian clothing with something a little strange sitting in her side bag. That’s right.  A lamb. The umbilical cord was still visible so it could not have been more than a few days to weeks old. And of course, the goat had on a hat that was just as bright as his caregiver’s. My immediate reaction was to ask this woman if I could take her picture because I did not want to be rude and do so without asking. Of course she agreed and struck her best pose for the camera. After I put my camera down she, and two other of her friends starting looking at me and rubbing their fingers together to indicate she wanted to be paid. I was shocked. Never have I seen something like this in Canada. Reluctantly, I gave her some sol and thanked her.

Now it was time to continue listing to the tour. But this woman was still the center of my attention. I caught out of the corner of my eye a man approach her and he held the lamb. Why didn’t I get to hold the lamb? I want to hold the lamb. But for now I need to continue the tour. We listened to Mapi tell us all amazing things about the square and it was very interesting. As we went to turn around, there was the woman with the sheep extended in her arms. How can I pass up an opportunity like this? First, Amanda went first and I took her picture. She took a very nice smiling picture and it turned out very well. Then it was my turn. I walked over, held the tiny lamb in my arms and posed for the picture. After that picture was taken I thought, well that’s a little boring. So I said out loud “Can I kiss the lamb?” Everyone laughed and said of course! I close my eyes and pucker up to kiss the cutest animal I have ever held. It was so soft and it was very comfortable being held. Of course, I kissed the cheek, not the mouth. After the picture was taken I thanked her very much and again paid her. Looking at the picture now, it is probably one of my favourite pictures I’ve ever been in. It was so spur of the moment and unplanned. And for it being our first day, it’s an amazing memory and a great start to my trip.

My favourite part might be the displeased look on her face for kissing her money maker.