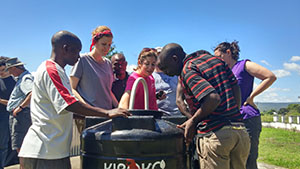 Mikumi Solar Water Project 2016 – I awoke on our final morning in Mikumi to a mingling of the dawn chorus and the call to prayer.  As I listened and reflected on the past two weeks in Tanzania, and the weeks and months previous in preparation, I could not help the feelings of sadness that arose.  Sadness about having to leave a place I had, in a short space of time, grown to love.  Sadness about having to leave people in Mikumi that I had connected with so quickly and easily (something that I am typically not good at). And sadness about the prospect of things unfinished.

The scope of the project this year was exceptionally ambitious.  Initially, the project centered on the design and building of a solar pasteurization system for disinfecting the water used at VETA Mikumi.  However, after much discussion, design and research by the team of students and faculty, it was determined that the priority this year would be to develop a prototype system that would remove the extremely high calcium carbonate hardness from the water.  Without removal of this hardness, any method of pasteurization through heating would lead to fouling of equipment due to scale build up.

Even with the narrowing of scope, the project was still daunting.  Given the limitations associated with the project location like intermittent electrical service and availability of resources, conventional methods of hardness removal would not be feasible.  Lab testing performed by NSCC Environmental Engineering Technology students of water samples taken in Mikumi suggested that mechanical aeration would stimulate a chemical process by which the calcium carbonate hardness would come out of solution and precipitate relatively quickly.  In response to these results, design work was focused on the development of a solar-powered mechanical aeration and settling system.

The time, effort and ingenuity that the student team brought to the design of the water softening system cannot be overstated.  The system that was put together over many iterations is completely custom designed and follows no third-party plans, documentation or case studies.  Indeed, during the design phase of the project there was virtually no up to date literature found regarding hardness removal through aeration.  The final design before deployment to Mikumi consisted of three 500 litre tanks (aeration, settling & storage) plumbed in succession with gravity fed flow controlled by timed solenoid valves, along with a solar powered heater test rig to monitor for potential scale build up after treatment.  The design of the system alone is a testament to the technical knowledge and skill of the students, but the real test was to come in Mikumi with the building and commissioning of the system.

After a flurry of final preparation and a long journey, our team arrived in Mikumi on Sunday, May 8th.  I had been harbouring mixed feelings of eagerness and trepidation about the project to this point.  However, the warm welcome we received by the faculty, staff and students at VETA Mikumi, quickly evaporated doubts that our project would be successful.  “Welcome to your home!” exclaimed one of the Mikumi faculty as we descended from the bus.  I was not aware at the time how much like home this place would become.

We set to work first thing on Monday morning and immediately encountered the first in a long list of challenges.  Every engineering project has these types of challenges, but experiencing them in a different culture, with different limitations for resolution than accustomed to is particularly stressful for even the most experienced project teams.  A partial list of the issues that arose and were dealt with are:

In each of these and other cases where a challenge threatened the success of the project, the students responded with grace and inventiveness.  It was inspiring to see students from widely varying fields of study collaborate to solve a problem.  I can think of many seasoned technical professionals that could take a lesson from the student team on how to work through a problem together.

Along with the many daily challenges, there were also many daily victories.  The most important of these was demonstrating out of the lab and at a much larger scale the effectiveness of aeration for removal of hardness from the water.  With the concept proven, the team could focus on constructing and testing the prototype treatment system.

By our side through all of these victories and challenges were the students, staff and faculty of VETA Mikumi.  I have never witnessed a group of people more helpful, friendly and eager.  Whether it was Automotive students learning to perform water chemistry, Electrical students digging trenches and running wire or Guiding students competing over describing to us the local plants, animals and birds; they did it all with a keenness that was infectious.  You could see it pass on to the NSCC students, which was invaluable during the challenging times.

The people of VETA Mikumi were thankful as well.  Thankful that we were just there, with them.  Thankful that they were able to show off their school, their homes.  And thankful that we had come such a long way to help them with such a basic thing as water to drink.  It made me thankful too, that I was offered this unique opportunity to help and take part in two very different groups of people coming together toward a common goal and to see our students grow and learn in a way that is much too uncommon.

Unfortunately, despite our collective resourcefulness in surmounting every challenge that was laid at our feet, late in our second week at Mikumi, two tiny things kept us from fully realizing our goal.  They were electrical components critical to the control of the solar aeration system that became damaged.  Without them, there would be no way to operate the system.  Our Electrical Engineering Technology students worked valiantly up to literally the last few minutes available to us to come up with a work around that would establish at least some partial control to the system.

But it was not to be.  With time decidedly not on our side, I made the call to stop the Electrical Engineering Technology students from working.  It was probably one of the most difficult things I have had to ask anyone to do in my professional career – to stop someone from fixing something that they and I knew they could fix.  The looks of disappointment from all the NSCC students were heartbreaking.

It was time to go.  The bus was waiting to take us back to Dar es Salaam and our respective journeys home.  The VETA Mikumi staff, faculty and students were waiting to say farewell and send us on our way.  We explained the situation to the people of Mikumi.  That the thing that we came to do would be left undone.  They were disappointed as well, but they also understood that some things cannot be helped and sometimes, time runs out.

But they were also thankful.   At a farewell gathering, each of us received a gift of a kanga – a traditional East African cloth.  It was a small thing, but very symbolic of the gratitude they were expressing toward us individually and as a group.  I have to admit that it was very hard for me to accept this gratitude as I felt particularly undeserving of it.

Goodbyes were said, pictures were taken, tears were shed and at long last we boarded the bus for the long drive back to the city.  It was very quiet.  The weight of the previous two weeks of mental and physical effort weighing on us all.

So now I sit in my hotel room in Dar composing what is to be a 200 word blog.  This is the result.  A form of therapy I suppose.  As I type these words, I am finding that my sadness is slowly giving way to hopefulness and a little bit of pride.  Hopeful that in the near future we can get the system running completely from afar with the help of VETA Mikumi staff and pride in how our students conducted themselves – as dedicated technical professionals and worthy ambassadors of the best Nova Scotian values.

Engineering is science applied toward the betterment of society.  It is a fact that our NSCC students engaged in a level of engineering practice that surpassed their collective years of experience.  Even though the project may be seen as unsuccessful from a strictly materialistic standpoint – the system was not working when we left it, I am coming around to thinking that it is still a success based on how it will benefit both Nova Scotian and Tanzanian society in less tangible ways – through the personal connections, deep learning and personal growth of students in both countries.

I have been unduly fortunate with being granted this experience of working with such worthy and excellent people.  I hope that my contribution has been of equal measure.  I also hope to return someday.