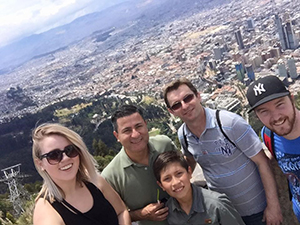 Colombia Enactus 2016 – When tasked to help anyone at any capacity, a lot of people will stop and ask, “What’s in it for me?” In September 2015, NSCC International and Enactus NSCC Waterfront were given the opportunity to assist a newly formed co-op of farmers in Colombia who wished to make their product more marketable and sustainable. We had nothing to gain but the strengthening of bonds that we had previously made when a former student, Nicolas Mendoza, was part of the student body at NSCC.

Through the assistance of students, faculty, and an extraordinarily helpful consultant named Alexandra Orozco, one group was set on the path to create a market study to measure the viability of the products, while another group developed an economic and ecologic sustainability manual for dairy farmers.

Traveling to Colombia was an adventure on its own; one that Kenedie and I made special. Instead of the traditional flight to Toronto, and then straight to Bogotá, we took a flight from Nova Scotia, to Philadelphia, to Miami, then to Bogotá. It was long, but worth it when we landed.

Every person we interacted with in Colombia was more than accommodating with our lack of Spanish speaking skills, and they made it easier to get by.

We ventured to the top of Monserrate in Bogotá with Zoran Kondali and Nico during our first weekend, and the views were pristine. You could see almost all of Bogotá from the top. The air was very thin up there as well, as we were 3,100 metres above sea level, making it difficult to breathe as we trekked up the mountain.

On Monday, we presented our manuals and findings to Gestando, the co-op organization helping the newly formed co-op in Colombia, and were off the next morning to Nilo, Huila outside of Bogotá. At 9 am in Nilo, it was 30 degrees Celsius, so we naturally stopped for a tinto (small, black, quick coffee) and cheese bread in a stifling hot bakery. We initially believed that the farms that we were visiting would be laid out like the traditional North American farm, but when we arrived, we had to walk up a long hill to the house where the farm began. We accidentally walked in on a meeting that the co-op was having, and we were treated like rock stars. Everyone stopped what they were doing and got up, greeted us, fed us, and showed us around.

The farms that we explored were among an amazing organic rainforest. The farmers had the land perfectly surveyed so that they could find any piece of produce they needed. The land was lush and gorgeous, and gave us a new outlook on how practices and procedures operated there.  It yielded coffee, cacao, guanabana, papaya, bananas, plantains, and more. After our tour of the mountainous grounds, we were asked to stay for lunch, and this was the best part of our trip; a traditional, meticulously crafted meal. There was yucca, fried plantain, chicken, potato, custard (I hadn’t had custard in 15 years), and a tasty cider drink. They showed us more hospitality than we could have ever asked for, and left us with a cacao fruit to snack on while we drove back.

That one day was the pinnacle of the trip; the reason we were there. We wanted to see firsthand how they operated, what they need going forward, and how we can help. The experience we shared is an unforgettable one indeed, and it has opened my heart to continue to grow Nova Scotia’s natural bond with Colombia. The more we learn, the more we can help each other symbiotically.

For our next step we will look at helping these farmers become more organized structural as a co-op, and to make their products more marketable domestically and internationally. Nova Scotia being one of the main markets that we wish to focus on.

At the beginning of this I asked, “What’s in it for me?” Initially I had no intentions of any gain. I only wanted to help out as much as I could through the help of Enactus while gaining some leadership skills. I underestimated that the culture, the people, and landscape would always playout in my mind like a fairy tale, and will until I return. The influence that this project has had over me has changed my perspective on life and ecological and business sustainability. It will always be a pivotal landmark in my life, having taken me out of my comfort zone.

Thank you NSCC Waterfront Campus, Gestando, ACOA, Enactus, NSCC International, NSCC Entrepreneurship, Zoran Kondali, for whom we would have been lost in  without, Alexandra Orozco for her undying passion, and everyone who helped support me along the way, especially my Nova Scotia Dodgeball family who helped fundraise a lot of the trip.