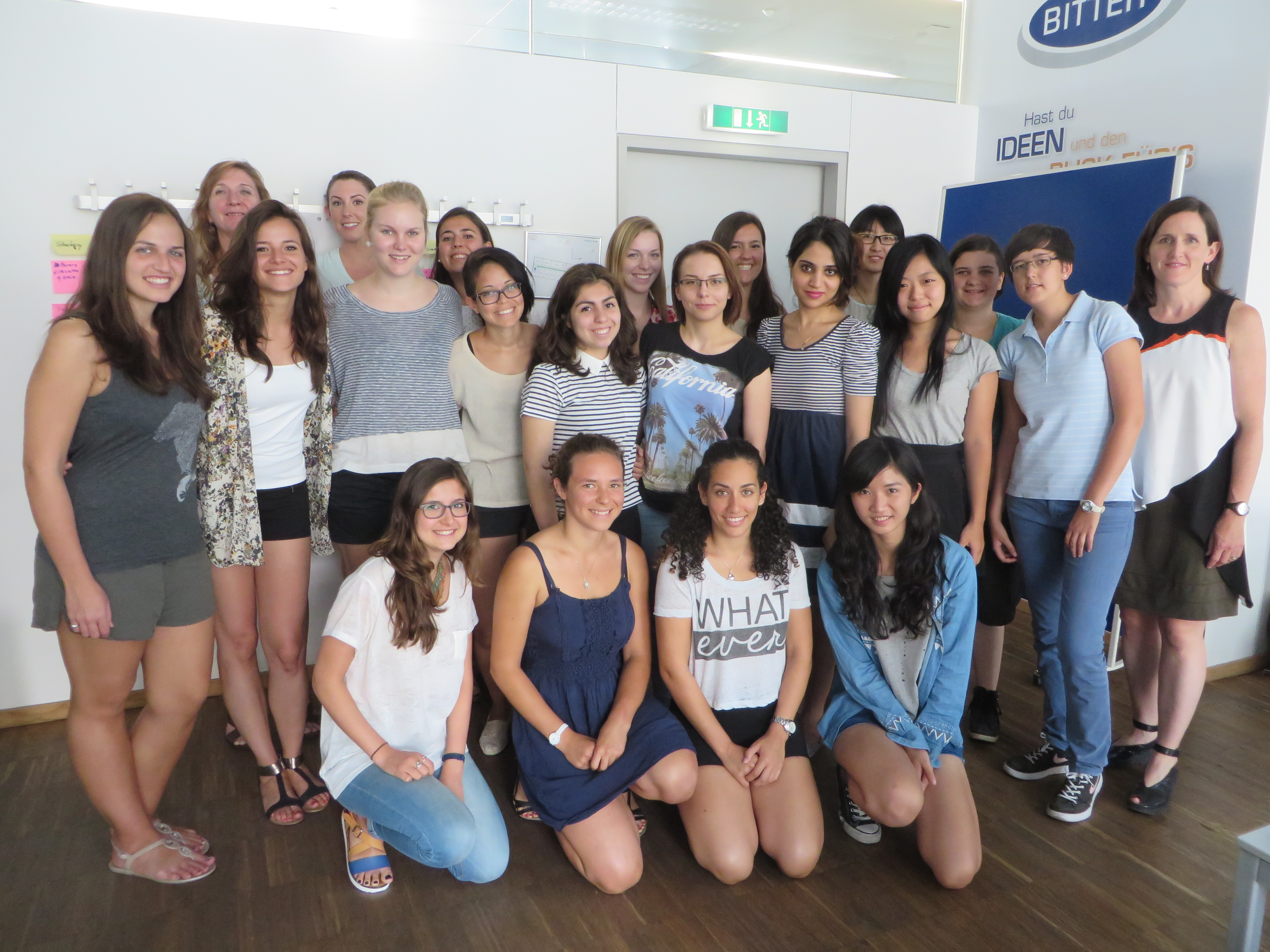 Women in Engineering Summer Program in Austria – In July 2015, I was a guest lecturer at the International Summer Academy for Women in Engineering at the University of Upper Austria, Wels Campus (FHO).  The learning opportunity was created by NSCC International.  There were nineteen students from nine countries representing Spain, Taiwan, Canada, Iran, Poland, Cayman Islands, China, South Africa and Slovenia.  Cynthia Rogers, a colleague and friend at the College, was also participating in the school.  We were fortunate to have an opportunity to determine the material we would present at the summer school.  We also were able to collaborate and present our material together.  It was a great reminder of why collaboration is a good thing: we shared ideas, gave feedback to each other and created an overall better session by connecting ideas to real applications.  I think it was also good for the students to see teamwork in action – two female engineers learning from and supporting each other.

Our topic was “Sustainability”; I prepared from a “definition” and “discussion” point of view and Cynthia brought her technical expertise in building design.  It was important to both Cynthia and I to create a learning experience for the students that not only involved them participating, but also challenged the way they looked at the world and encouraged them to see that they have an opportunity as female engineers to shape the world.  In the presentations the students gave back to us after a learning activity, we could see they had started to challenge the way things are produced, materials used and social fairness involved in production.  I believe we were able to engage all the students in provocative discussion that challenged them to consider innovative ways to build our world.  A world where they engineer effective, sustainable solutions.

We originally requested from the summer academy school coordinator, Franz Daschill, that in addition to our three hour session, an hour or so to discuss with the students “women in engineering” – barriers, advantages, opportunities, etc.  However, when we originally met the students the day before, we learned that team projects had been assigned in a very broad subject area; they were to develop and design a product or idea.  Because the topic was so broad, teams were having a difficult time figuring out where to start and we could sense the students were anxious.  We saw an opportunity to help.  After finishing our morning session, we held a brainstorming session to formulate some ideas, select an idea and begin planning.  Our session seemed to relieve some stress and the teams were able to move forward.  It felt great to be flexible and help where we were needed.

The facility at FHO was impressive.  Classrooms used chalkboards, had “sponsorship” in the form of advertising and the facility did not use air conditioning.  I respected the lower energy use, although we did happen to be there on the hottest day the summer had seen – 41 degrees Celsius!  The faculty were very friendly.  Franz was very kind and went out of his way to show us as much of the facility as he could.  We had the additional advantage of having Roxy Pyke, Cynthia’s daughter who had attend FHO, our tour guide.  Our hotel was two blocks away from the school and Roxy showed us where to go at the University as well as in the town of Wels.  She also showed us the “beer” vending machines at the school and clarified that the elevator level “0” was the ground floor.  The next two floors down were “-1” and “-2”, which I really appreciated, being a math nerd.  It was also interesting to see a bigger version of our “Design and Innovation Center”.  My colleagues in Mechanical Technologies will be interested in seeing the automation that simulates a manufacturing set-up, something that would improve our ability to teach in the Industrial Engineering Technology program.  I took lots of pictures!

With respect to increasing our collaboration with FHO International, I can see an opportunity for greater involvement.  In the short time we were at the school, we were able to make a connection with the students.  It would have been nice to be there for more than two days.  The two key FHO instructors were male and additional involvement of female leadership for the students might have been advantageous.

On a personal note, my family joined me on this trip for a two week adventure.  I am writing this blog on a train heading to Prague with my two daughters and husband.  I feel very fortunate to have had this “excuse” to do a trip such as this with my family.  Before Wels, we were in Salzburg, Austria.  After, we went to Munich before Prague.  When I asked my daughters and husband what they learned from this trip so far, Holly, eleven years old, says she learned a lot of German.  Jill, age nine, found it interesting that the wasps in the beer gardens don’t actually sting you (admittedly, we have visited several).  Andy enjoyed trying different foods and never knew shaved radish was good with beer.  Most importantly, I think we are all learning that it is OK if people in different places do things differently than we do.  Many things we do the same.  I will cherish these memories.