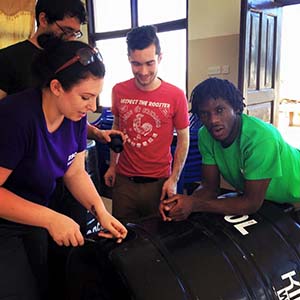 Mikumi Solar Water Project in Tanzania — It’s hard to believe that we’ve been here for almost two weeks. Actually, the entire experience has been completely unbelievable. In the beginning, I wasn’t sure what exactly to expect for this trip. So I did my research, asked a few people and tried to get a grasp about life in Tanzania. I don’t think anything could have prepared me for how amazing this country is. Walking off the plane, the heat hits you in the face. Foreign languages, smells and sights surround you. The airport is busy and you’re not sure where to go or what to do, but you make it through with your luggage in hand and your visa stamped. Now what?

The drive though Dar Es Salaam was an adventure all on its own. The city drives the opposite direction than Canada and there is no such thing as speed limits or stop lights. People on motorcycles swerve in and out of traffic and on more than one occasion I was holding my breath thinking we were going to hit someone sprinting across the streets. But we made it to our first checkpoint with everyone accounted for and in one piece. After two nights in Dar, several beer and a 6 hour bus ride, we arrived in Mikumi.

Mikumi is a small but beautiful place. It’s surrounded by mountains that disappear into the clouds and the greenest vegetation you’ve ever seen. The sunsets turn the sky into a painting of fiery reds and burnt orange and gold. The rain doesn’t fall, it pours; like the clouds just burst at the seams. Lying in bed, under the tin roof of the apartment, you are reminded of standing under a waterfall. But when the thunderous sound quiets, the songs and sounds of the animals can be heard as if you were outside among them. The people here are just as beautiful as the place. I’ve never met so many genuinely wonderful people excited to just say “Jambo” (Hello). Everyone is always smiling, laughing and eager to help and ask questions.

One evening, a handful of the tourism students took us down into the Mikumi village to show us around. This may have been one of the most memorable experiences I’ve ever had. We started the tour by visiting the primary schools and the sacred fig tree. We then ventured into the fields and towards the homes. Each one we passed had children playing in the yards or running up and down the street. The younger children seemed confused about our presence and weren’t sure if they should come say “hello” or if they should run and watch us from a distance. One child in particular, left me with the largest smile upon my face. She wasn’t old, maybe three or four, and was playing with (what I assume) were her two older sisters. Wielding a large stick, she was robed in a beautiful red and brown patterned fabric, wrapped around her like a dress. She was adorned with beads and jewelry carved from wood and stood with her feet in the dirt. When she realized I was standing there she stopped dead in her tracks and looked up at me with curious but concerned eyes. I bent down and held out my hand, trying to piece together a sentence of broken Swahili, introducing myself. She took a few steps towards me, covered her eyes, and reached out her hand into mine. Her mother had at this point fallen over from laughter at the sight of her brave daughter interacting with her first white woman. When she realized I wasn’t anything to be afraid of, she opened her eyes and gave me the most beautiful, innocent smile. Just like that I had made a friend. I had ventured farther down the dirt road, and ran into another group of children laughing, smiling, and playing a game of football (Soccer). One had seen me walking towards them and kicked the ball towards me as an invitation to play. So, right there in the middle of the dirt road, we played an impromptu game of football that lasted until the sun started to fall below the horizon. It was perfect. Getting to play and laugh with the locals was more than I could have ever asked for and a memory I will treasure for years to come.